Credibility Questions of a Leader

Many of you may have seen Senator Marco Rubio’s speech in response to the President’s State of the Union Address. About halfway into his speech it was obvious he was in need of a drink of water. It placed him in a difficult situation and some may say he lost credibility. He was on national television and in the middle of one of the most important speeches of his career. (see the video here: http://www.cbsnews.com/8301-250_162-57569094/rubio-more-government-breeds-more-problems )

Finally, to the relief of many who were watching him, he reached off camera to a bottle of 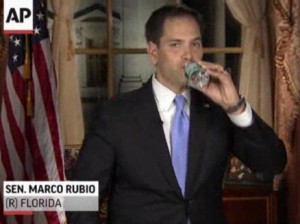 water and took a drink. Although it helped him get through the remainder of his speech, detractors took to Twitter and made jokes and were critical of him for doing so.

As an up and coming political leader, did he do the right thing? Did his action detract from his message? Will his decision to take a drink of water during the speech haunt his future as a politician? Did he lose credibility with his audience? What flexibility and grace should we give to leaders?

We believe he did the right thing. He was clearly in discomfort before taking the drink of water and that, in itself, was detracting from his message. Unlike the President, the camera was on him 100% of the time. During the President’s speech, the camera often drifted to shots of those in the audience, giving him the opportunity to take a drink and relax and enjoy the applause. Senator Rubio did not have that luxury. He showed himself to be human. Many of us could relate, having been in a difficult situation and needing something that would disrupt the flow of what we were doing.

Senator Rubio was delivering a message that needed to be heard and most people respect his decision to take that drink of water. Those who mocked him and made jokes about it would most likely never support him anyway and most likely disagreed with his message – so no harm done.

We are familiar with other leaders who have made gaffes, some serious mistakes that have taken down a leader from a lofty position. Senator Trent Lott’s comments regarding the career of Senator Strom Thurmond on his 100th birthday come to mind. But, credibility gaffes are different from what happened with Senator Rubio. His behavior in taking the drink of water was obviously to ease his discomfort and enable him to focus on delivering the rest of his speech.

Leaders need to have the flexibility to adjust in situations like this; and observers should give grace to leaders, as we are all human. Leaders need to be confident in their abilities to the extent that if they make a decision such as Senator Rubio’s, they will continue to have the attention of those listening and it will not affect their credibility. Often, self-deprecating humor later helps the leader look even more human. A leader that can laugh at himself often endears themselves with followers.

With the wrong behavior, credibility can quickly be lost and take years to overcome. Having a drink of water in the middle of an important speech certainly doesn’t fall into this category; however, we should all be aware of how even our slightest actions are scrutinized by others. As leaders, we are all held to a higher standard; therefore, it is vital that we are aware of our behaviors and how others perceive us.

Will we be able to be perfect and never make a mistake? No. But we can heighten our awareness and be prepared especially when in front of an important audience.