Leadership Character: Does it Matter?

Does leadership character matter? A President is impeached for lying under oath about his adultery. CEOs are fired for cooking the books. A company receives funding for a project knowing they cannot succeed. A CEO lives a lavish lifestyle with a golden parachute as the company goes over the abyss.

We notice leaders who lack character. Fortunately, most leaders operate with integrity, but we hear little about them in comparison with those leaders who fail in this area. In this blog, We want to explore the competencies that make up character and answer the question posed in the title, “Does it matter?”

Character shapes a person’s moral or ethical quality. Character also influences decisions and actions. Leaders make many decisions and it is important to realize that many of these decisions may be made based upon the leader’s own personal character. Consequently, leadership character can have a major effect on others, positive or negative.

To get a better understanding of what traits play an important role in a leader’s character composition, consider the following competencies that we believe describe leadership character:

You may be asking, how do some of these competencies relate to character? Think about what the opposite meaning looks like in a leadership context and it can provide clarity. For example: The opposite of initiative is indifference, laziness, inactivity, timidity. Putting this into a leadership context, if a leader does not display initiative his character is damaged as he appears weak, uncaring, and lazy. 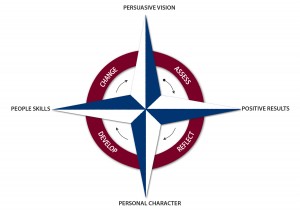 us choose not to act with ethical character. Sometimes we may even think that acting with good character is too much trouble or that it is easier and faster to act without character, so we take the easiest and quickest route. However, is this right to do? Our answer is no – shortcuts or behaviors that are out of character are not ethical and do not belong to the effective leader. However, this is a question each person must answer for themselves. As we previously stated, character is a personal quality and likewise a personal decision. You must choose to operate with character and be a respected, effective leader or choose to operate outside the boundaries of character and lose respect and tarnish your image as a leader.

Character is so important that parents work tirelessly to instill character into their children. Most parents realize that teaching children the difference between right and wrong is extremely important. For example, as parents we teach our children to tell the truth, to not exaggerate a story, to stand up for what is right, to keep going in the face of difficulty, to follow and respect their elders (teachers, parents, and other adults), to get their homework and household chores done, and scores of  other important character lessons. All of these childhood lessons are important and shape who we are and eventually how we lead ourselves and others.

If we have acted without character in the past, it is often difficult and painful to reverse the damage. Think about the person who has repeatedly told mistruths. As time goes on, this person continues in their dishonesty and soon a complex web of lies is fabricated. To undo something of this magnitude can be very difficult, often humiliating, and typically only successfully done with the help of a trusted advisor. This is why we so strongly emphasize character in our leadership practice. Acting right the first time makes subsequent actions easier. Dishonest actions are always destructive in the long run.

Each day leaders must take actions and make decisions based upon strong and ethical character. Leadership character has a far and wide influence. Those around us who observe us look to us as leadership examples and they want us to do the right thing. Our future leaders are being built upon the character that we embrace, whether positive or negative.

Character is a learned trait as well as a choice. If you wish to personally grow in strong character, we highly recommend some of the resources on this website, especially our book recommendations on the subject and the forums to see the views of other leaders. Additionally, if you face difficult or questionable decisions, seek out a trusted coach or mentor.

If you are not sure that strong and ethical character matters go back to the list of competencies we described as part of leadership character and ask yourself what would each look like if the opposite were true of a leader? Then, ask yourself if you would respect such a leader.

Author, executive coach, and leadership expert, Sidney works with university and corporate clients in growing their talent and results within all levels of the organization.